Video Game / Virgo Vs The Zodiac 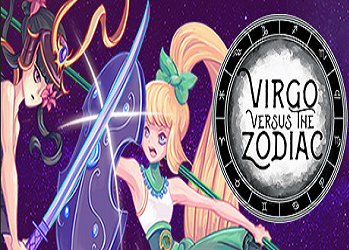 Virgo Versus the Zodiac is a Science Fantasy JRPG developed by Moonana, inspired by the classic games like the Mario & Luigi and Mother series. It released for PC and was developed in RPG Maker MV, and its demo was released

in 2017. The full version was published by Degica, and released on December 12, 2019.
Advertisement:

The game features traditional turn-based combat with real-time execution of moves: blocking, countering and timing your attacks carefully as well as predicting your foes' moves is essential to succeed in Virgo’s twisted and unforgiving cosmic quest to bring back the Golden Age, a period of peace, symmetry and balance, or so she thinks.

In this galaxy where every action means a reaction, you’ll play as Virgo, the Holy Queen, often called Dreadful Queen by heretics, bringing mayhem to the Zodiac Realms and leaving a trail of stardust on the way, all to fit her excessively righteous worldview.