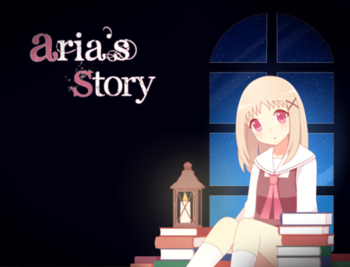 is a Western RPG Maker horror game by Lydia. The game uses RPG Maker VX Ace as its engine. The game is focused on exploration, story and puzzles.

Aria, a bookworm girl, loves visiting her local library. One day, she does so and falls asleep... and wakes up in a strange realm that looks like the library, but is haunted by spirits. Aria, now the protagonist of her own story as the mysterious glasses-wearing Narrator tells her, must escape this strange realm.

In September 2019, the game received a remake which added several new scenes and two new endings.