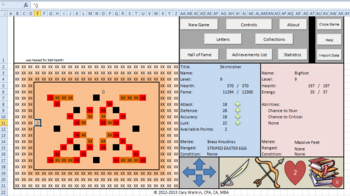 Arena.XIsm is a freeware RPG, made by Cary Walkin in 2013 in Microsoft Excel.
Advertisement:

In it, the player character rebelled against the all-powerful Emperor of his land, and was thrown into the titular Arena as a gladiator. He also left a wife, Kylem, and a son named Jake behind, and receives notes from Kylem at the end of every level, which fill you in on the situation at home, alongside providing hints about the enemies you'll face in the next level.

On the whole, it contains 2000 enemies, while the storyline features multiple endings. The game is available on PC versions of Excel 2007, 2010 and 2013, and can be downloaded here