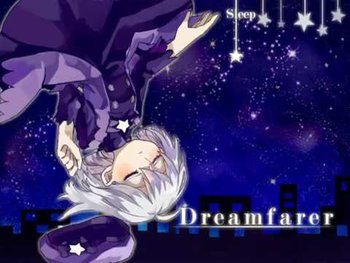 Ten-year old Polaris finds herself trapped in a dream world created by a mysterious young man named Almond. Inside, things look magical and fantasical (despite their different perspectives), but things soon turn stranger as Polaris finds out why Almond doesn't want to wake up in the real world.

Dreamfarer is a freeware adventure exploration game by Harrymiao and Kagari·joshua made in RPG Maker XP. It has beautiful dreams (as well as nightmares), puzzles, a hint of si-fi and a teaspoon of horror elements.

An English version, translated by Rabbiton, can be obtained here