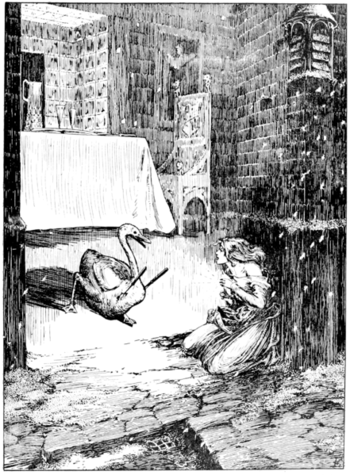 "The Little Match Girl" (Danish: Den Lille Pige med Svovlstikkerne, meaning "The Little Girl with the Matchsticks") is Hans Christian Andersen's Short Story about a dying child's hallucinations on New Year's Eve. First published in 1845, it has been adapted into different media such as a Disney short and a Made-for-TV Movie. While technically a New Years' Eve story, it works at any time during the winter, especially Christmas Eve.

On a cold New Year's Eve, a little girl is shivering in the streets. She has a bundle of matches to sell, but she hasn't sold any, and she knows her father will beat her if she returns home empty-handed. She looks into the window of the house she sits in front of, and imagines how nice it would be to celebrate with a family. Then huddling in a corner, she begins to strike her matches one by one, at first to derive a little warmth, and then to keep seeing the beautiful images of warm fires, roast goose and brightly-lit trees she sees in their flame. She looks up and sees a shooting star, and recalls that her beloved grandmother once told her that when a star falls, a person is going up to heaven. With the strike of another match, she sees her grandmother, and she desperately lights all of her matches at once to keep the vision from fading. In the brightness, she feels her grandmother take her in her arms and carry her away, leaving the cold behind forever.

On New Year's Day, passers-by see her frozen body huddled against the building, incongruously smiling. They are filled with pity at the sight of her with all her burned-out matches, but it doesn't matter because the little girl is now happy in heaven.

There was a French silent film that can be found here

. The adaptation differs from the original, though. It has also been adapted as an audiobook with slideshow in Houkago No Kamishibaibu. It's been set to music in the piece "The Little Match Girl Passion

" by American composer David Lang, which won the 2008 Pulitzer Prize. Animated short adaptations include The Little Match Girl from 1937 and The Little Matchgirl from Disney in 2006; both were nominated for Oscars for animated short film. Even Sanrio made their own adaptation of the story starring Hello Kitty as part of the 2000 OVA series Hello Kitty's Animation Theater which is extremely faithful to the story.

Tropes in "The Little Match Girl":