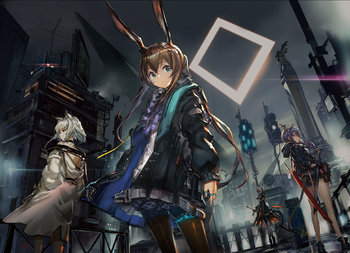 Fight, in this endless night, until the dawn.note Pictured from left to right: Kal'tsit, Amiya, Talulah (in back), and Ch'en.
Kal'tsit: In the past few years, Originium has become the lifeblood of the world. It first gave birth to greed, power, pain, hatred. And soon it breeds countless monsters - us. We were deprived of our identities, and were named — The Infected.
Amiya: We were manipulated. We were betrayed. We were blinded with hopes. And the dead never returned... If the footprints of life are destined to be buried by time...then we will never stop moving forward. Dr. Kal'tsit, be our dawn...
Kal'tsit: But what about you?
Amiya: With my companions, I am never alone. After all, we are... Arknights.
—Official Trailer 2

, "The Overture"
Advertisement:
Arknights (Chinese title 明日方舟 or Tomorrow's Ark) is a mobile Science Fantasy Tower Defense game with RPG Elements developed by Hypergryph Network Technologies and Studio Montagne. Developed in Shanghai, China and originally available in Chinese since May 2019, a trio of international servers (in English, Japanese and Korean, with the English version available in most Anglophone countries, much of Europe, and southeast Asia) were opened to the public on January 16, 2020. The game was made available in Taiwan on June 29, 2020.

The world of Terra is on the brink of ruin. An infectious, incurable disease known as oripathy has been spreading across the populace for the past several centuries, based on contact with the seeming wonder material originium. Originium can power devices and achieve effects that are, for all practical purposes, Functional Magic; but overexposure causes oripathy, in which the afflicted's tissues are slowly transformed into a form of originium that is even more virulent than the "naturally"-occuring mineral. Sufficient crystallization, naturally, results in death. Those with oripathy became known as the "Infected", and are outcast and feared by the general public. In response to the rising oripathy pandemic (as industry begins to rely ever more on originium's incredible generative and transformative properties), many of the Infected banded together to fend for themselves, with only each other to rely on.

You awaken as the Doctor, a master tactician and member of the group "Rhodes Island", a private medical company based on a small nomadic city of the same name; Rhodes is composed mainly of Infected, drawn from the world over and all walks of life, who seek a cure for oripathy and to end the stigma against the Infected, and in a world as dangerous as Terra has become, maintains a defense force that it has had to use far more often than its leadership would entirely prefer. Severe trauma has resulted in the loss of your memories, and you are greeted by utter chaos: on the brink of a Catastrophe (the manifestation of originium deposits via sudden natural disasters), the forces of the Reunion Movement, a band of Infected who seek revenge on the society that shunned them, have suddenly struck back against the Empire of Ursus, seemingly hell-bent on driving the entire city of Chernobog into the Catastrophe's heart and annihilating the city in the process. With no one but your loyal, seemingly-long-time compatriot Amiya and your fellow Rhodes Island Operatives to guide you, you are now tasked with leading the charge to your freedom and uncovering the truth behind the mysteries of your past and future.

A manga anthology adaptation was announced

publishes a number of webcomic spinoffs. Unlike the anthology above, the below spinoffs are considered canon supplementary material:

An official anime adaptation, Arknights: Prelude to Dawn, was announced

was revealed on April 23, 2022, as part of the CN 3rd Anniversary livestream. The third PV

announced that it would start airing on October 28, 2022, and the fourth PV

announced it would also premiere globally on Crunchyroll. The Stinger of the eighth and last episode announced that a second anime adaptation, Arknights: Perish in Frost, is in production.

A spinoff, Arknights: Endfield, was announced