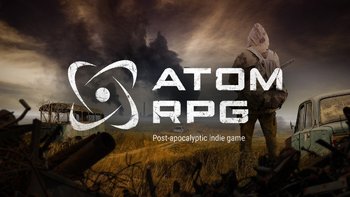 note Goroda, gde ya byval, po kotorym toskoval, Mne znakomy ot sten i do krysh...note Cities that I have been in, those that I missed, They are familiar to me from their walls to their rooftops...
Advertisement:

ATOM RPG is an indie, survival-horror RPG set in an Alternate Timeline, post-apocalyptic Soviet Russia. The game was released on December 19th, 2018. Unlike in our world, the Cold War ended up turning hot in 1986, drowning the world in atomic fire. Civilization collapsed almost entirely, outside of a few small pockets, with the vast majority of humanity falling into amoral infighting.

When the bombs dropped, however, an organization sheltered itself from the carnage, and maintained a strong, if discreet, presence. This organization, ATOM, began a long, covert mission to rebuild pre-war society from the shadows. You are a cadet in this organization, about to be sent out to find a lost expedition, led by one General Morozov, which was last seen heading to a mysterious bunker, numbered 317...

You'll have to meet locals and learn to live in this new world while your mission unfolds, and hopefully you'll be able to get in contact with the ally they order you to seek out in Krasnoznamenny, the large settlement nested on a river in the southeastern section of the region.