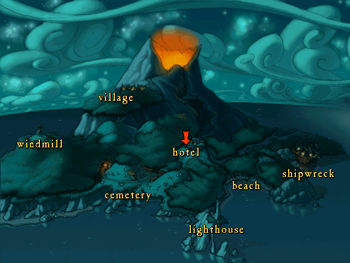 You'll be seeing this a lot, but very briefly.
"Here is the map. Where do you wish to go?"
— Gwonam, Link: The Faces of Evil
Advertisement:

A variety of interactive video game maps where the player doesn't steer the player character across the map but only has to click on the destination location to instantly go there. (Older games that have no mouse functionality, or console games, often use the directional keys instead of a cursor to make a selection, but they still count in the spirit of the trope.) Essentially, it functions like another game menu, albeit stylized and pretty. Optionally, it will have smaller-scale maps to act as sub-menus.

Accessing the global map often requires either reaching the edge of the current location or interacting with a special transporter item or character, overlapping with Warp Whistle (though not all Warp Whistles present themselves as world maps). When "traveling", the path may be tracked on the map to conceal the level loading sequence. En route, the player can be optionally interrupted by a single Random Encounter (rarely more).

At the beginning of the game, only a couple of destinations will be available, but more will be added to the map later, either by exploration (finding hidden exits from known locations), by accepting quests that lead you there, or by exploration and completing certain quests on site. If the destination has several entrance points, your original location will often determine to which of them you will teleport.