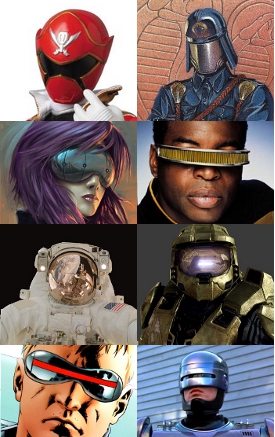 Shady characters.L - R, top to bottom Gokai Red/Captain Marvelous, Cobra Commander, Motoko Kusanagi, Geordi LaForge, Astronaut Scott Parazynski of NASA, Master Chief, Cyclops/Scott Summers, and RoboCop
A visor is a piece of eyewear that covers at least both eyes and the bridge of the nose. It's like a pair of goggles, but with temple-arms. Visor also refers to the faceplate of a helmet, the part that can be raised or lowered. This is about both kinds, specifically, ones that are opaque on one side, which is often—but not necessarily—connoted by a gold, silver, or obsidian mirror effect. Opaque, spherical helmets also count. Bonus points if the technology to do this shouldn't have been invented yet.
Advertisement:

For all we know (unless we've seen out from the wearer's POV), any of these could be opaque on both sides, but unless the wearer is blind this would be a rather major design flaw.

When used symbolically, it can show that the character has an aspect he wants to hide (sometimes physically) or isn't all there to begin with. Sometimes used in tandem with Samus Is a Girl.

Separate lenses don't count, they go on Opaque Lenses. Compare Sinister Shades, The Blank, Eyeless Face, The Faceless. Contrast In Space, Everyone Can See Your Face.