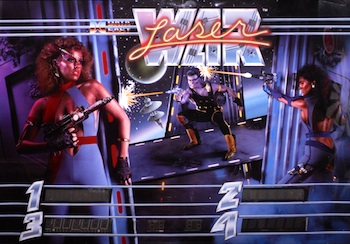 The last Great War of the future will be fought between Vidal Sassoon and Aqua Net
A Flipper So Strong It Could Crack Walnuts!
— Advertising flyer
Advertisement:

In 1985, after Stern Electronics closed its doors, the pinball factory and assets were purchased by Data East, who resurrected it as their new pinball division. Their first table was 1987's Laser War, designed by Joe Kaminkow, programmed by Lonnie Ropp, and illustrated by Margaret Hudson and Kevin O'Connor.

Like the title says, the game is centered on a futuristic firefight between three teams welding Ray Guns shooting Frickin' Laser Beams. Hit the Red, Yellow, and Blue targets, then return to the corresponding colored bases to enable multiball. Charge up the Ion Cannon, then fire it during three-ball multiball for a devastating million points. Let the 2.1 stereo sound keep your adrenaline pumping, but don't get distracted by the nonstop lightshow and dazzling flashers.

Among pinheads, Laser War is known for three things — its Ham and Cheese-filled theme, amusingly schlocky translight art, and blisteringly fast and challenging gameplay. Many feel that the game could've found a bigger audience if it had a solid Science Fiction license behind it; as such, it is often overlooked by collectors, making it a surprisingly affordable table for the first-time buyer.