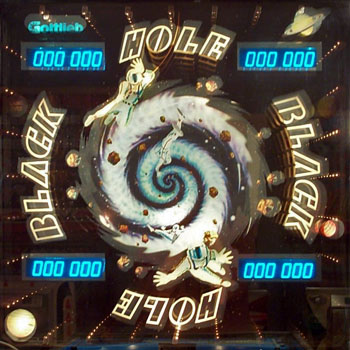 A New Experience in Space!
"Do you dare to enter the Black Hole?"
Advertisement:

Black Hole is a widebody pinball machine by Gottlieb. It was originally conceived by Joe Cicak, designed by John Buras and Adolf Seitz Jr., and released in October 1981.

It had a number of features going for it, the most striking of which were the dual playfields: a normal playfield, and the "Black Hole", a reversed playfield embedded underneath, visible through a transparent hole in the table. It also featured speech, something of a novelty at the time, with the game memorably taunting prospective players by saying "Do you dare to enter the Black Hole?" during Attract Mode. Finally, it featured an eye-catching mirrored backglass with a rotating black hole. Both features were taken out of the export version. The game cost 50 cents to play, which was fairly extravagant at the time, but played up in marketing

to promote the game's earning potential.

The original concept came from Joe Cicak, a pinball player from Pennsylvania who was curious on how to use the empty space inside a conventional pinball table. After watching Carl Sagan's Cosmos: A Personal Voyage, he and his friends were inspired to build a prototype game; when the actual game proved fun to play, they decided to present it to Gottlieb, who were making games with large playfields. Gottlieb, already under pressure for innovative table designs from the success of Williams' Black Knight, quickly agreed to purchase the rights.

Black Hole isn't for the timid – many players were turned off by the table's difficulty, and the reversed lower playfield is guaranteed to disorient new players. Getting multiball is difficult and considered an incredible achievement, which explains why its highly regarded by players looking for a challenge. Even today, it remains an interesting piece of pinball history for its design and art.

Digital versions of the game are available for Pinball Hall of Fame: The Gottlieb Collection and The Pinball Arcade.