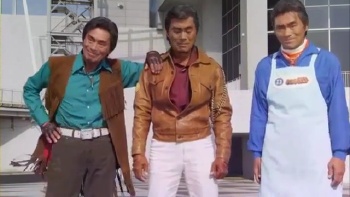 Kenji Ohba, Kenji Ohba, and Kenji Ohba.
"So," Chekov clapped his hands in eagerness, "who's the problem?" When Riker pointed down at the deck, he blinked and said, "Oh, there he is." He knelt down and rolled the still-senseless Bester over, checking him for weapons. "Rather a handsome devil, isn't he?"
"We hadn't noticed," Worf growled.
— Pavel Chekov taking Alfred Bester into custody, during the Undocumented Features story "A Day of Infamy."

Let's say you're a fanfic writer. Let's make another assumption and say that you like a particular actor and everything they've ever been in, because they were in it.

It's entirely possible that you may write a Doppelgänger Crossover, a story in which two characters played/voiced by the same actor meet each other. Or that they are each other. In other words, a crossover which is only happening because the two sources share an actor.

You may desperately want Riker to meet Xanatos, or Ranma Saotome to be a reincarnation of Inuyasha, or you might just want to see what happens when John Crichton takes the place of Cameron Mitchell, and don't even start on what would happen if Han Solo bumped into Indiana Jones. The end result, however is the same. A Doppelgänger Crossover.

On occasion, this can be one part of a Massive Multiplayer Crossover. See also Fanon Welding where fans speculate that two unrelated works are part of the same universe especially if the actor/actress plays similar characters. Compare I Want You to Meet an Old Friend of Mine.