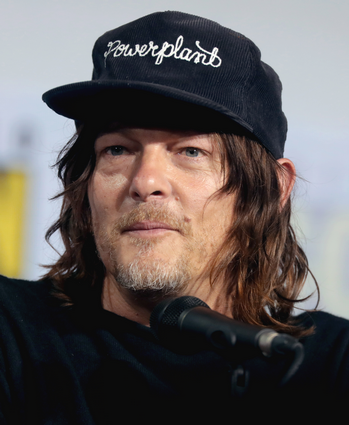 Zombie killing will never be the same.
"I'm still insecure, but when I first started acting, I was really insecure. I glared at a lot of people. I assumed everyone hated me. Somehow that scowl has turned into an acting career."
Advertisement:

Norman Mark Reedus (born January 6, 1969 in Hollywood, Florida) is an American actor and model. He is best known for his roles as Daryl Dixon in the AMC series The Walking Dead, Murphy MacManus in the 1999 film The Boondock Saints and its 2009 sequel The Boondock Saints II: All Saints Day, as well as Sam Bridges in 2019 video game Death Stranding. He has also directed several videos and modeled for various fashion designers.

He is currently in a relationship with Diane Kruger, and together the two have a daughter.