Literature / How Green Was My Valley 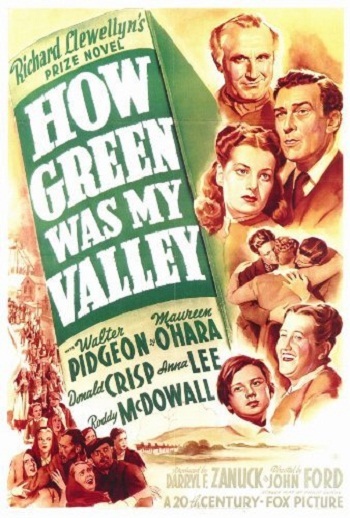 "How green was my valley then, and the valley of them that have gone."
—Last line of the novel
Advertisement:

How Green Was My Valley is a 1939 novel by Richard Llewellyn, which was adapted into a 1941 20th Century Fox film directed by John Ford and starring Walter Pidgeon, Donald Crisp, Maureen O'Hara, and Roddy McDowall, with a score by Alfred Newman. It tells the story of Huw Morgan, the youngest son of a mining family in the Welsh village of Cwm Rhondda. Through his eyes, we see such events as his brother Ivor's wedding, the consequences of his sister Angharad's chaste romance with preacher Mr. Gruffydd (as well as her loveless and failed marriage into the mine owner's family), and a miner's strike in his town.

The film was a great financial success and later won five Oscars, including one of the most (in)famous examples of the Award Snub backlash: it won for Best Picture in 1942, which doesn't seem that much of a surprise, since it was well-received at its time, and still maintains a good reputation among film buffs. The problem? Also up for Best Picture in 1942 was a little picture by a novice director called Citizen Kane, widely regarded as one of the greatest films — if not the greatest film — ever made; and another one you might possibly have heard of called The Maltese Falcon, which virtually codified the entire genre of Film Noir. As a result, Valley is best known today as "that movie that won Best Picture but maybe shouldn't have". In 1990, it was selected for inclusion in the National Film Registry of the Library of Congress.