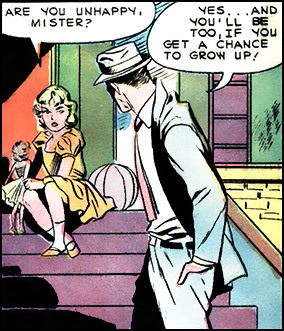 Little Sally has never been the same since then...
"I'll let you in on a little secret, Detweiler. Every adult you've ever known was a kid at sometime in his life. You think we don't remember summer vacation? Riding bikes down by the creek, catching polliwogs in a jar, camping out under the stars? Well, you're wrong! Some days, I sit there in my office, looking out at you kids on the playground and I think, 'They don't know how good they got it. In a few years, they're all going to be grownups like me and all those good times will just be memories for them, too.' So go ahead. Put a whoopie-cushion in my chair. Cover my carpet with fake vomit. Make fun of my big, saggy butt. But don't you ever say I don't care about summer vacation, 'cause those memories are the last part of childhood I got left."
— Principal Prickly, Recess: School's Out
Advertisement:

Several works involving children as the protagonists insist on reminding the viewers that childhood doesn't last forever. Not only will this be implied throughout the show's narrative, the Kid Hero themselves will probably be all too aware of this fact, and refer to it openly, with varying degrees of acceptance or dread.

In addition, this will probably feature as a plot point. The concept of "childhood's end" will probably be clearly illustrated, with the now-grown up character losing something that was fundamental to their happiness as a child. On shows based mainly in reality, this will probably take the form of the protagonist's group of friends going their separate ways after graduation. The child may lose his guardians, Mons, or even his powers, if these all come with a time limit or are directly linked to his status as a child. For example, children are assumed to be wide-eyed, curious, innocent and trusting; adults are usually portrayed as pragmatic, cynical and set in their ways.

Wistful Amnesia is often part of this growing up process as well. To maintain the Masquerade, various magical/scientific agencies will ensure that the hero remembers nothing of the adventures he had as a kid...or of the allies he made and The Mentor/guardian who looked after them, often delivering a less than idealistic moral on the transience of friendship. Viewers may end up feeling they've been handed an Esoteric Happy Ending.

In some works, this is invoked as the reason why Adults Are Useless; they have forgotten how hellish being a child can be, and blithely ignore all the attempts by the child to tell them, because they have convinced themselves that it was better then.

If the episode/chapter/title is "Growing Pains" that's your warning this trope is in full effect.

Occasionally a child character will get to live as an adult for a while, Freaky Friday-style, taking full advantage of their increased power and ability to make their own rules. Inevitably the Aesop emerges that adults can't do whatever they want, but on the flip side it also becomes broken when you realize that not only do kids have rules and choices made for them (you can choose a job you want and even quit for whatever reason—but you're forced to stay in school when you're younger and cannot quit) but they also have (often parentally-enforced) responsibilities like adults do (school, homework, pre-selected chores, etc.)

May result in a viewer having a "Screw that!" moment, leading to selective Fanon Discontinuity.

Happens a great deal in the real world when someone leaves adolescence and their teen-age years behind and realizes that while childhood is not always a picnic, things are different when mom and dad aren't paying their bills anymore: they have to find a place to live, buy health insurance, work at a job they may not like in order to have money in the bank, and otherwise deal with all the things that made their parents so uncool and boring. One of the first steps into being a full-fledged adult is realizing all the sacrifices your parents had to make and the insane hoops they had to jump through to keep a roof over your head and food on the table...

See also Milestone Birthday Angst, Silly Rabbit, Idealism Is for Kids!, Kid Hero, Coming-of-Age Story, Competence Zone, Death by Newbery Medal, and Bittersweet 17. Contrast Dangerous 16th Birthday which uses the advent of adulthood as the start of an adventure... unless you just want to be normal — then growing up still sucks. Contrast Not Growing Up Sucks and Old Flame Fizzle.

In this song, cut from "Channel Chasers", Timmy sings about his decision to run away and live in television. While it didn't make it into the movie, the music is heard when Timmy is channel hopping.

Example of:
Trapped in TV Land

In this song, cut from "Channel Chasers", Timmy sings about his decision to run away and live in television. While it didn't make it into the movie, the music is heard when Timmy is channel hopping.