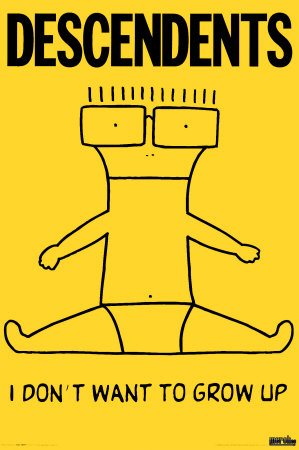 You want whale sperm with that?
NO!
—"Der Wienerschnitzel"
Thanks to modern chemistry, sleep is now optional.
—"Kids on Coffee"
Advertisement:

The Descendents are an American punk-rock band from Hermosa Beach, California. They started in 1978, released their first EP Fat in 1981, and their first album Milo Goes to College, in 1982. They went through many lineup changes and there's even an entire separate band that has three of their members. They continue to tour today.

Their sound was more melodic than most punk bands of their generation, and they sang about being losers, problems with girls, and other sensitive subjects, with a lot of nonsense and humor included. While nobody would mistake them for an emo band, they might be seen as a precursor for the genre – sensitive and melodic, but with edgier music. They're not as wangsty though, and a lot more fun. In addition to girls and other problems, the band sang occasionally about food and coffee, and in particular, not doing drugs (except for caffeine, of which they were fond). They even had at least one entire song about farting ("Enjoy").

The Descendents' original lineup was Frank Navetta on guitar, Tony Lombardo on bass, Bill Stevenson (presumably the Bill whose sperm is offered in "Der Wienerschnitzel", quoted at the top of the page) on drums, and Milo Aukerman on vocals (actually, Milo was not in the very first lineup, but he was added before the first album (which, to continue the digression, was actually an EP), and most fans would consider him one of the originals; some fans would even consider him the heart of the band).

Descendents have had many lineup changes over the years, with Stevenson always on the drums. An unnecessarily detailed list of their lineups is below.

Three of the Descendents' members formed the band "All" in 1987. Currently, both bands exist as separate bands; however, they share three members and play each others' songs at concerts, so the distinction is less than complete.

I'm Not a Troper: