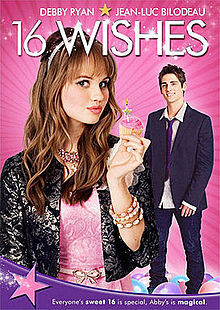 Everyone's sweet 16 is special; Abby's is magical.
16 Wishes is a 2010 Disney Channel Movienote  not to be confused as a Disney Channel Original Movie - one of two such premieres on the channel that year with that distinction, the other being Harriet the Spy: Blog Wars produced by MarVista Entertainment and starring Debby Ryan as Abby Jensen.
Advertisement:

Abby always wanted the perfect 16th birthday and for her 16 special birthday wishes to come true. But when it finally comes, it starts off less than spectacularly - until a fairy godmother shows up with 16 magical candles, each corresponding to one of Abby's birthday wishes. In the process she learns an important lesson - Be Careful What You Wish For.

The movie itself turned out to be a surprise success, especially with a demographic not typically associated with Disney Channel - adult males. For this reason, many give credit to 16 Wishes for helping to establish Debby Ryan as being a "face" for Disney Channel and helping her land her own sitcom, Jessie.

Not to be confused with Sixteen Candles - even though there are, indeed, 16 candles.