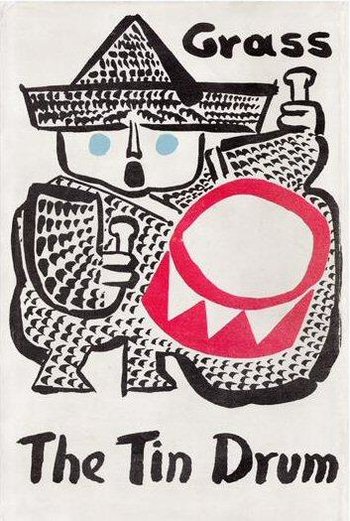 The first part of the Danzig Trilogy by Günter Grass, The Tin Drum (German: Die Blechtrommel) is a 1959 novel. It is narrated by Oskar Matzerath, a dwarf of questionable sanity.

Oskar was born in 1924, in the Free City of Danzig. On Oskar's third birthday, he refused to grow up and turn into a miserable adult. Because of this, he remains a boy throughout most of his life. Along his travels, he watches the rise and fall of Nazi Germany and discovers that eternal youth is not all that it's cracked up to be. He narrates his story from within a mental hospital, where he is confined c. 1952-1954.

The Film of the Book was released in 1979, covering the first two books. While plans were made to film a sequel to complete the story, it never came to pass. The movie follows Oskar from his birth until after the end of World War II and the Soviet invasion where he finally decides to grow up, and stars David Bennent as Oskar, Mario Adorf as his father Alfred, and Angela Winkler as his mother Agnes. The film attained controversy in both Ontario and Oklahoma, due to the belief that it depicted child pornography. The cases were both quickly overruled, however.

Tropes found in both the book and the film: