Film / The Maids of Wilko 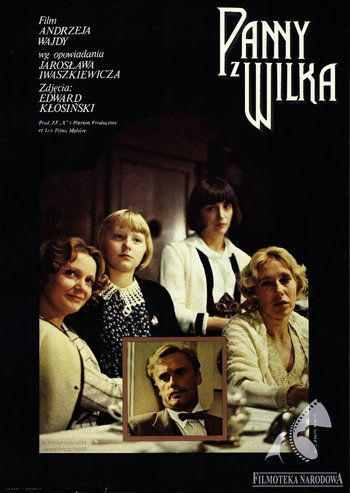 The Maids of Wilko (Panny z Wilka) is a 1979 film from Poland directed by Andrzej Wajda.

The time frame is a little vague but appears to be late 1920s (definitely later than 1923). Wiktor is an unmarried 40-year-old man who manages a factory in Warsaw. The sudden death of his friend Jurek from pneumonia throws Wiktor into a tailspin. In need of some rest and relaxation, he takes a break from work and goes to the country. In fact, he to his family's farm, a place that Wiktor hasn't visited in fifteen years, now owned by his uncle.

However Wiktor winds up spending the bulk of his time at the neighboring farm, Wilko. When he was a young man, Wiktor worked as a tutor for the six, count 'em, six daughters of the Wilko family. All six had crushes on him back in the day. The oldest, Fela, has since died, but five daughters are still on the Wilko farm. Eldest daughter Julia is married; her husband now runs the farm and seems to dislike his sisters-in-law. Second daughter Jola is unhappily married. Kazia, a divorcee, is looked down on by the others and seems to be a quasi-servant. Zosia is the most cynical about Wiktor's presence in the household. Tunia, the youngest and most innocent of the Wilko girls, immediately falls in love with handsome Wiktor.