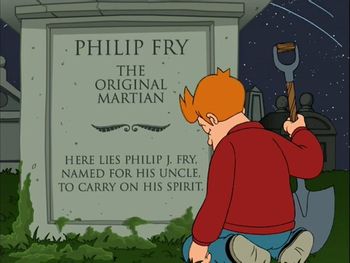 Don't you, forget about me...
"Your mom and I named you after an incredibly brave woman, really not all that much older than you. Your name is Molly."
— Toby Ziegler, The West Wing
Advertisement:

If you need a name for your new baby, ask yourself, "Have any of my loved ones died?" If so, look no further: renew, reuse, recycle!

The concept of naming the next generation to honour the originals (especially a dead father, grandparent or some Famous Ancestor) has a number of enticing benefits for writers. Firstly, it saves them the effort of thinking up a whole new name. Secondly, it pays lip service to dead characters, and thus has the valuable effect not only of creating a walking plot reminder but of making audiences go, "Awwwwww! He remembered his dead [insert role here]!"

It can be done well, especially if the background culture is one in which it's a common practice (Victorian Britain, for example). In another case of Truth in Television, some people did and still do simply have a custom of naming new children after beloved deceased friends or relatives. If that context isn't there, though, it runs the high risk of coming off as corny. Especially if there's more than one namesake running around, and they had just the right number of kids...

For people named after living loved ones, see "Near and Dear" Baby Naming. For kids who are just like their parents, but not necessarily named the same, see Generation Xerox. A Bittersweet Ending may manifest this in Babies Ever After.

Often happens after Someone to Remember Him By. May also result from a Child Naming Request. The child may inquire about the dead person as in Tell Me About My Father!.

Compare Birth/Death Juxtaposition, We Named the Monkey "Jack". Sister trope of Legacy Vessel Naming. This is one way of averting One Steve Limit, and a subtrope to Significant Name Overlap.