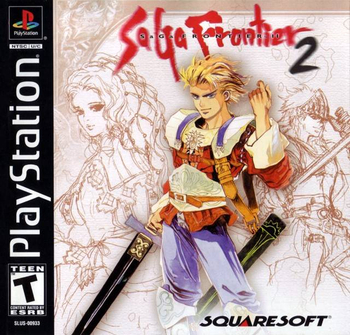 The second SaGa game released on the PlayStation, SaGa Frontier 2 is markedly different from its predecessor. Set in the world of Sandail, the plotline is divided into two scenarios, revolving around the lives and adventures of two men:

The two scenarios are very distinct: Gustave's plot arc is filled with political intrigue, with several sequences that are pure Cutscenes start-to-finish, while Wil's tale starts out as a more personal affair that gradually expands over the years, as he and his family uncover more about the situation they've gotten embroiled in. Naturally, the two tales intertwine over the course of history...

Late-Arrival Spoiler warning: Nothing Is the Same Anymore after the Wham Episode, and tropes related to the second half of the game will necessarily refer back to that event. Read with caution.

can end up so unprepared in the final dungeon that they risk not being able to defeat the final boss at all (and that's assuming they are able to defeat the Anima Lords before him), since once you begin the scenarios leading to the final dungeon, you can't go back to the world map, preventing you from accessing shops, inns, and opportunities to level up. Indeed, leveling up inside the final dungeon can be almost impossible if your characters are too weak, since some monsters can one-shot your characters with ease (even with good equipment), and others can take a long time to kill. In fact, it's highly recommended to only fight the bosses, since fighting normal monsters saps your party's strength (you need a fully healed party in order to face some bosses without too much risk), and some of their attacks can diminish your Life Points (which are different from Health Points), a resource that you can't restore in the final dungeon: using 1 Life Point restores all of your character's Health Points, but if a character reaches 0 Life Points, he will be considered dead, which means he can't be resurrected, and if your main character happens to reach 0 Life Points, it's Game Over (please note that your main character has the lowest amount of Life Points of your whole party). So, unless you have a save allowing you to go back and train your party before heading out to the final dungeon, you will have no choice but to restart the entire game.