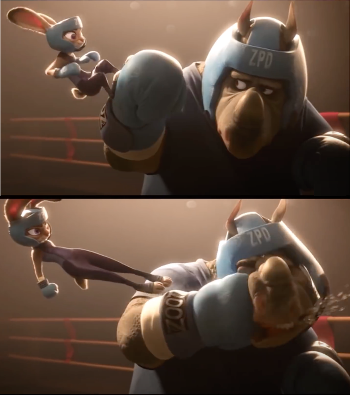 If you're not strong enough to beat a rhino, use the rhino's strength to beat it.
"Sans maîtrise, la puissance n'est rien." (Without mastery, power is nothing)
— Old Pirelli commercial for tires, probably paraphrasing from Horace's Odes Book 3, Poem 4, line 65.

This is a character who, despite being physically weaker than their opponent, is able to beat them because they are more skilled than their opponent. They'll prove Hard Work Hardly Works is a false premise, and even exploit the stronger opponents' sloppy technique and Pride to win. It's not unusual for the Badass Bookworm, and less unusual for The Heart of any team. This is often a sub-trope of Badass Normal.

If the Weak, but Skilled character is The Protagonist or The Hero, they'll usually be an expert at Deadly Dodging, a fast thinker, and generally win through cleverness and strategy that involve dirty fighting and Geo Effects to win. If they aren't, then they're like a Mentor, The Rival, The Lancer or The Smart Guy. They'll usually start out much stronger than the hero overall but won't keep up once the hero starts gaining skill himself in the use of his powers. They'll occasionally bail them out but force them to finish their battles, and urge them to train their power to stop the bad guy, whom this character can't take out because the bad guy is both Strong and Skilled (compare that trope).

A character who grows old and weak will often become this, having decades of experience to compensate for their lack of youth, but this can still be the case if they grow Stronger with Age and thus have nothing to compensate for. This is a common justification for how Badass Normals can keep up with more powerful characters in a setting or inside an ensemble. Death of a Thousand Cuts may also come into play.

It should be noted that "weak" (especially a Paper Tiger class) can be a relative term. The protagonist/hero might have a certain level of Super Strength and Super Toughness, but is completely outpowered by his opponent. In this case, the hero's own strength and toughness are what enable him to even hurt the villain and avoid being killed in a single shot, but he needs his brains and skill to ultimately win. If he's a Non-Action Guy, you're looking at a Crowning Moment of Awesome.

Curiously, it is not uncommon for these characters to be the Cold Sniper or an Archer. Since they mostly succeed, at taking out their opponents by mere distance alone. Those with More Dakka or BFS would be wise to take cover, less they risk getting savagely shot down.

Compare with David Versus Goliath, Combat Pragmatist, Difficult, but Awesome and, metafictionally, Cherry Tapping. Contrast Sacrificed Basic Skill for Awesome Training. Willfully Weak may be invoked to bring this about. One explanation for the power of a Badass Bystander. Despite their skill, may fall prey to I Don't Know Mortal Kombat. This can be an issue faced by a character that is Well-Trained, but Inexperienced. The rare villainous examples may fall into Villainous Valour, depending on their presentation. For characters with questionably useless powers within the superhero community proving otherwise, see Heart Is an Awesome Power.

Contrast Bigger Stick and Unskilled, but Strong, the latter being the inverse trope. Often achieves Victory by Endurance; Stone Wall is a Downplayed Trope for them.