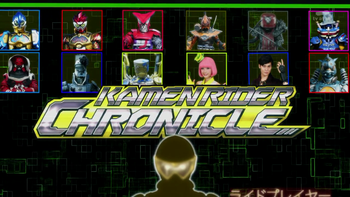 Kamen Rider Chronicle is the crossover love of Super Smash Bros., the addictiveness and MMO aspect of World of Warcraft, and the immersion and brutal early difficulty of Monster Hunter all wrapped up into one game. It's a celebration of the greatest games of Genm Corporation's library to be beaten in the real world with a revolutionary evolution from VR.

Although extremely popular in Japan and beloved by many of Genm Corp's fans, it has come under controversy for perceived health risks from the Ministry of Health and CR as well as the practices of the CEOs which the game has been handed management by multiple times. The game was cancelled in late 2017 after the untimely death of Genm Corp CEO Masamune Dan and no plans are in motion to revive it. However, in early 2018, former company CEO Kuroto Dan unexpectedly released a Spiritual Successor game, Zombie Chronicle, unannounced and much to everyone's surprise. This game was discontinued shortly afterwards due to poor reception.

Tropes applying to the game: