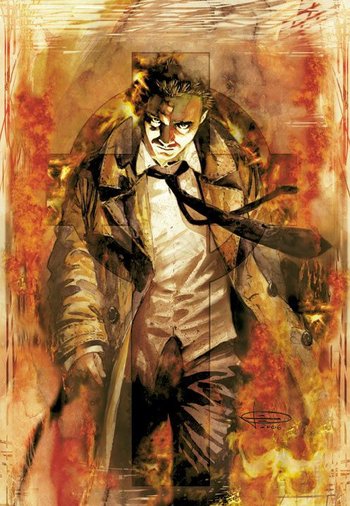 "My name's John Constantine, and here I stay: haunted by London. And London, haunted by me."
Mictlantecuhtli: You forget yourself. I am no upstart demon, scrabbling in the dirt of the human soul. I am Mictlantecuhtli. I am a god.
John: Great stuff. I'm John — and I'm a bastard.
Advertisement:

John Constantine is a creation of Alan Moore and Steve Bissette, first appearing in Saga of the Swamp Thing #25 (June, 1984) and going on to head his own Vertigo series, Hellblazer, in 1988. The character started out firmly entrenched in The DCU — his first arc was a crossover with Crisis on Infinite Earths, even! — but gradually drifted off into his own self-contained universe. (Although the likes of Zatanna, his ex girlfriend, and The Phantom Stranger still popped in from time to time, as did Morpheus.) He returned to the DCU in the Cosmic Retcon of Flashpoint, subsequently heading a number of series.

Constantine himself is generally portrayed as an adrenaline junkie who's constantly getting involved with the supernatural because he hates the snobs who rule the world. Although he is a Badass Long Coat Anti-Hero, he's portrayed as being a poor fighter (unless he's fighting dirty or gets the first punch in), generally eschews guns, and is actually not that powerful a sorcerer. Instead, he uses his brains to outwit, trick and manipulate his enemies. Well, brains, magic (mind-reading and gambling a specialty!), bullshit, and not infrequently the power of his own reputation. His reputation as a manipulative bastard has led to him being referred to as the World's Greatest Con Man.

One of his most persistent traits is his habit of manipulating friends and allies into fighting for him, frequently getting others involved in his schemes. This often winds up getting others hurt or killed. Indeed, the series became notorious at one point for introducing a new "old friend" of Constantine's, then killing them off every few issues.

Despite this, Constantine is generally a sympathetic character who refuses to absolve himself of his guilt — except for the time that he turned it into a demon baby and threw it off a cliff — and generally does the right thing, even if he does it in a particularly nasty way. He is a strident humanist and sort-of anarchist who fights for humanity's right to make its own decisions free of the control of Heaven, Hell, politicians, or other forces of control. The fact that he does this by manipulating people is an irony that has not been lost on several writers, or even on Constantine himself during moments of self loathing.

It is a major theme in the comic that Constantine never has any unequivocal permanent victories — enemies will always return, revenge will be sought and friends will be lost. Ultimately, Failure Is the Only Option.

There is a 2005 film adaption, starring Keanu Reeves as a Catholic, Californian, raven-haired, gun-wielding exorcist version of Constantine.

A cute (!) version of John appears with other Vert-goMites in the Bat-Mite story Mitefall.

Alan Moore also claims to have met him. Twice. In Real Life. And he's not the only one — Jamie Delano once saw John sitting outside the British Museum.

Constantine debuted on NBC in the fall of 2014, with Matt Ryan (the voice of Edward Kenway) in the title role. Unlike the film version, the TV version of Constantine is blond, British, and bisexual, the three Bs many Hellblazer fans expect from the character. Matt reprised the role for the DC Universe Animated film, Justice League Dark, and again for the animated series Constantine: City of Demons and a recurring role in the Arrowverse and Legends of Tomorrow. Taron Egerton lent his voice to Constantine for the Audible dramatization of The Sandman and Jenna Coleman is set to play his ancestor Johanna Constantine (and Distaff Counterpart) in the upcoming Netflix series.

open/close all folders
Vertigo Comics (1988-2013)
New 52 (2011-present)
In the New 52 reboot, an alternate, younger John works as a member of the Justice League Dark, a team that focuses on the magical and supernatural aspect of the DCU. He also received a DC solo title called simply Constantine in 2013, which often ties into Justice League Dark.
TV series (2014-2021)
See his tropes here.
There's been a lot said about John Constantine, all right, and everyone who's known him has their own pet theory.
Really, though, he's just a man.
Perhaps one day, if we let him, he can be a hero.