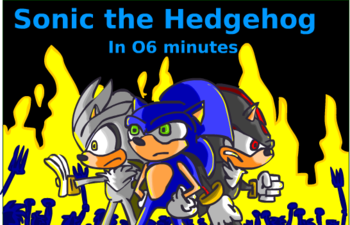 What happens when you take the Sonic the Hedgehog franchise, cover it in Stylistic Suck, and throw in lots of zany, irreverent humour and a whole lot of lampshades? You get Sonic in X Minutes, a series of parodies by Roger van der Weide of Kingdumb Hearts fame. It's effectively The Abridged Series of the entire Sonic franchise, with each instalment lampooning an individual Sonic game within a given number of minutes (until the later instalments, when the length constraints were done away with). The first one, parodying Sonic Adventure 2, was released in 2004, and since then almost every post-Adventure Sonic game has been parodied, as well as Sonic CD, the 1996 OVA, and the 2020 movie.

You can find them, including the older ones, on Roger's YouTube channel