Fanfic / A Dance on the Mats 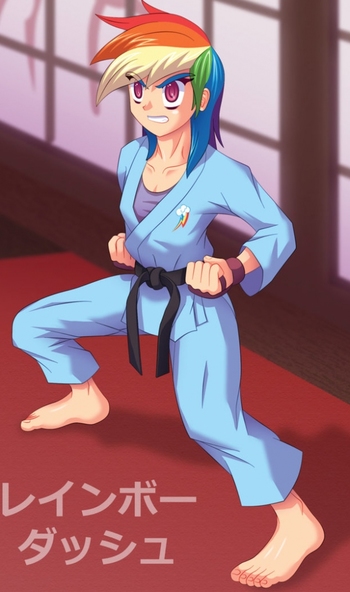 A Dance on the Mats cover picture
Advertisement:

Rainbow Dash has always been an incredible fighter, the best in Canterlot High and the region, but when a new student shows up, she struggles to keep the title. Even more surprising, however, is that the student is a boy.

Anonymous is different than every guy Dash has ever met. Strong, confident, and more than capable of handling himself, it's no wonder Canterlot High's star athlete has taken an interest in him. When he shows her just how strong he is, however, it shakes Rainbow Dash to her very core.

With a desire to reclaim her title, Dash throws everything she has into defeating Anon, wanting to prove her strength and earn Anon's respect. Yes, his respect, and nothing more...

A Dance on the Mats

is a My Little Pony: Equestria Girls one-shot fanfiction by Kind of Brony.