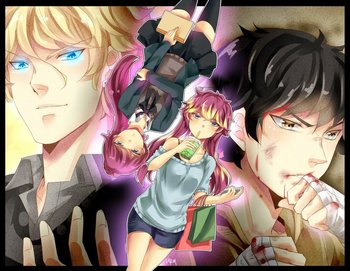 Nothing is ordinary in this world...
The world is not perfect. Learning to deal with its flaws is just a normal part of life. But there comes a point where these imperfections spawn a crushing realization... that something needs to change...
Advertisement:

unOrdinary is a webcomic created by uru-chan in May 2016, exploring the trials and tribulations of super powered students at an elite private school. The first season consists of 155 chapters, and season two continues from chapter 156 onward. A 2-chapter flashback/ side story focusing on the school exploits of former student Rei takes place between the two seasons.

At Wellston Private High School, abilities determine everything. Those with greater abilities and powers are at the absolute top of the social hierarchy, commanding the fear and respect of their peers. After all, those students are the ones who are going to attend the best universities, get the best job offers, and end up running the world. Those with lesser abilities must bow to the whims of those with more power, unless they want to end up on the wrong end of a laser blast or a super-powered punch. All the way down the scale students jockey for position, picking on those with less power while hoping to avoid drawing the ire of anyone above them in the hierarchy.

And then there are the rare, unfortunate students with no powers at all. They're referred to as "cripples", and are ostracized by everyone. John would rather live out his high school days in peace, ignoring the social hierarchy as best he can. But as a "cripple," he's a common target for his superpowered peers for as much the fact that he's powerless as the fact that he refuses to acknowledge the hierarchy. Coupled with the fact that he can't seem to ignore the plight of those who are bullied, John spends most of his time either running from fights he can't hope to win or in the infirmary with bruises, broken bones, and bloody noses thanks to his antagonistic school mates. Nevertheless, John carries some hope that his peers will eventually learn to use their powers to help one another, instead of for selfish gains. In fact, John's already befriended Seraphina, the single most powerful student at school.

Though he's carved out a tenuous place for himself at Wellston, the time may come when John can no longer continue to ignore the hierarchy. His defiance hasn't gone unnoticed by the students second in power only to Seraphina — the King, Queen, and Jack of Wellston, as well as their allies. Those students aren't happy about John's actions, and they're determined to teach him a lesson about "his place" in the world.

But events outside of Wellston are shaking up the school, and everyone, from the highest elite to the lowliest "cripple" like John, is about to be swept up in a wave of action that will force them to question everything they thought they knew about their powers and their place in the world.

Formerly hosted on Tapastic and then on LINE's Challenge League, it can currently be read at LINE

as one of their main series. Also has its own wiki here

Blyke: Tell me, Isen. Where's the damn line?! What does this guy have to do for it to finally not be okay? Or does him being stronger than all of us just get him a free pass for everything?