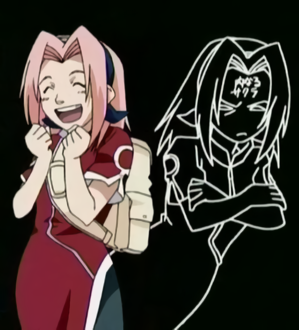 Be careful around this girl. She will kick your butt, because looks aren't everything...
We wear the mask that grins and lies,
It hides our cheeks and shades our eyes.
— Paul Laurence Dunbar
Advertisement:

Related to GIFT and What You Are in the Dark. Often used in conjunction with Hidden Heart of Gold, Jerk with a Heart of Gold, Bitch in Sheep's Clothing, Evil All Along, Good All Along, Sugar-and-Ice Personality, Sad Clown, Stepford Smiler, Undercover When Alone, Broken Ace, and The Proud Elite. Obfuscating Stupidity and Obfuscating Insanity can be subtropes, as can A Darker Me.

Not to be confused with Hidden Depths or Rich Idiot With No Day Job, which are about skills and roles rather than personality. Compare and contrast Becoming the Mask, where the facade itself actually becomes part of the character's personality.

Hana Song, callsign: D.Va, looks the part of a bubbly gamer girl in public. In private, however, the war with the Gwishin Omnics weighs heavily on her.

Alternative Title(s): Hidden Self, True Self

Hana Song, callsign: D.Va, looks the part of a bubbly gamer girl in public. In private, however, the war with the Gwishin Omnics weighs heavily on her.