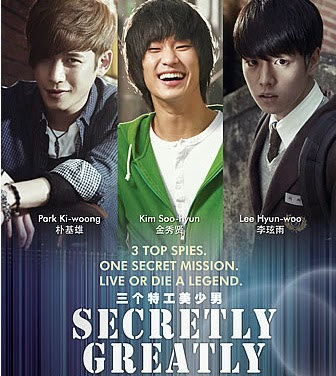 Secretly, Greatly is a South Korean action dramedy film. An adaptation of the Korean Webtoon Covertness, it was directed by Jang Cheol-soo and released in 2013.

The film follows three top North Korean spies who are assigned to be Deep Cover Agents in a South Korean village. Won Ryu-hwan (Kim Soo-hyun) is disguised as village idiot Bang Dong-gu, Rhee Hae-rang (Park Ki-woong) plays wannabe rockstar Kim Min-su, and Rhee Hae-jin (Lee Hyun-woo) plays a high school student. The three men settle into their mundane lives until power shifts between the North and South mean they are finally assigned a mission: to prevent them from falling into the South Korean governments' hands, they must take their own lives.