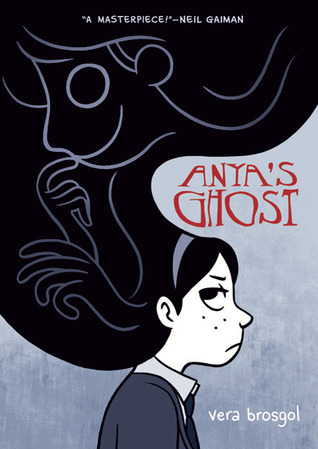 Everyone needs a best friend.
Advertisement:

Anya's Ghost is a single-issue graphic novel by Vera Brosgol. It features Anya: an insecure, dowdy teenager, a Russian immigrant (although she's lost the accent), who finds herself struggling with the day-to-day trials of highschool life, like her crush Sean and mouthy friend Siobhan. One day, she falls down an abandoned well and discovers the bones of a young girl who fell down there before her... As well as the ghost of said girl, still haunting the well she died in ninety years prior. The ghost, Emily, turns out to be pretty friendly, and the two eventually become good friends, as well as partners in crime. (Anya uses her invisible buddy to cheat on tests, keep watch while she's smoking and spy on classmates.) Of course, these sort of things rarely end well, and soon Emily proves more of a problem than a friend.

A lovely story about friendship, selfishness and maturity. Try the artist's blog

, the film rights were bought by Andre and Barbara Muschietti. However, the latest news of the film's development comes from 2018

, with the announcement of Emma Roberts being slated to play Emily, so the current status of its production is unknown.