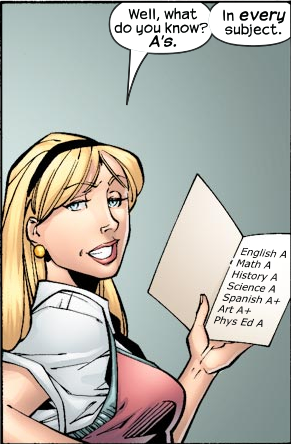 "A" for Alpha.
Weiss: I was thinking we could be on the team together.
Pyrrha: Well, that sounds grand!
Weiss: Great! [turns around with smirk and clasping hands, monologuing to self] This will be perfect! The smartest girl in class combined with the strongest girl in class! Together we will be unstoppable! I can see it now! We'll be popular! We'll be celebrities! We'll get perfect grades! Nothing could come between us now!
— RWBY
Advertisement:

Similar to the Class Representative in her concern for anything school related and like the Alpha Bitch in how ambitious she is, this character is aggressive in her academic superiority. She will act like she's in charge and decide who gets to do what. She's no shy Bookworm. This can be a male character, but for some reason, probably because both Men Are Uncultured and Higher Education Is for Women, you can expect a female in the role.

They'll be found in a show that has a private school or a large cast as the one who will fight to be the best but is somehow still popular. The natural Student Council President but not necessarily the only one. Unlike a regular Alpha Bitch she is rarely glamorous and much more likely to be a friend sooner or later like the Lovable Alpha Bitch. She can often be the Beta Bitch.

The academic subtrope of The Perfectionist and Alpha Bitch. Compare to Insufferable Genius and Nerdy Bully. Compare also with Go-Getter Girl.

The polar opposite is the Kindhearted Simpleton. Also contrast Gentleman and a Scholar.