Literature / On the Edge of Eureka 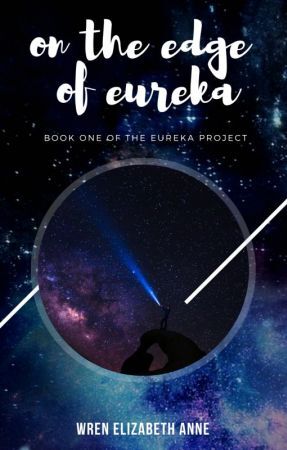 "Freedom is a beautiful, and wonderful, and dangerous thing."
—-Acidalia Planitia, Cipher.
Advertisement:

On the Edge of Eureka is a science fiction novel posted by Wattpad user strange-quark, also known as Wren (which is probably short for Karen.) On the Edge of Eureka is mostly Speculative Fiction, with bits and pieces of modern-day technology taken Up to Eleven. Set in a grim, dark, Cyberpunk Mega City called Eleutheria, one of its chief themes is the ethics of DNA modification as the planet plunges itself into a civil war over eugenics. In the background, DNA data storage, supercomputers, artificial intelligence, and nuclear bombs all come into play, while the backstory seems to hint at a smallpox pandemic that happened far into the past. Enlightenment, a prequel presumably discussing this more, is in the works.

Eureka's plot kicks off with an assassination attempt on recently-crowned Imperatrix Acidalia Planitia by the eugenicist group the Novagenetica, intending to force her mother back on to the throne; her mother Alestra supports the Nova, while Acidalia is part of another Revolutionary party that opposes their ideals. She escapes and sends her soldier brother on a wild goose chase to get the right data to a spy in the Revolution, and eventually another leader on Mars. On the way, Immunus AX-C240 ("Ace"), scientists Athena and Carina, dancer Lyra, and a number of other people from all walks of life get swept into high-stakes political games as Acidalia tries to run a rebellion while keeping the planet from descending into chaos. Eleutheria soon breaks out in a civil war, with everyone stranded in the middle of it. Meanwhile, the Mira, a semi-alien civilization from the same roots as humans, take advantage of the mess to land, seemingly seeking Eleutheria's alliance in an intergalactic conflict and leaving Acidalia forced to choose between a planet of her people and a galaxy of aliens she's never met.

The book received a "reboot" of sorts about a year after it was originally released. Though much of the same plot was kept, it had some minor alterations, among the most obvious being the change from omniscient perspective to limited third-person perspective that switches from character to character every chapter. Aside from that, it remains quite similar to the original. Other changes include giving Acidalia an actual royal title instead of having her be a vague important figure, changing the caste names from a mixture of Romance languages to entirely Latin, and making Alestra more important than in previous drafts.