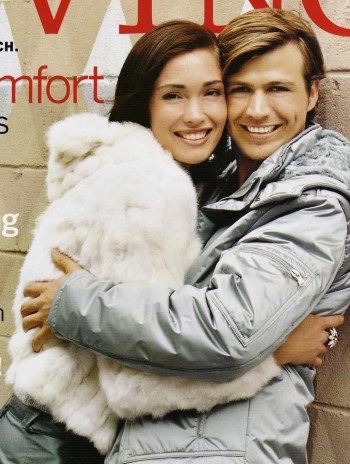 Similar clothes,* one's a white fur jacket, and other's a silver jacket, but still coordinate similar faces, and even matching smiles. It's not sci-fi, it's just marketing.
Advertisement:

Don't they look lovely together? Well, of course, they look good together. That's the point.

In modeling, couples can be just any two models, but there seems to be a preference for how the appearance of the two complement each other. It's not always the case, but it shows up often enough.

If the couple is modeling clothes (usually for a Fashion Magazine or ad), as in the pic at right, expect the clothes to complement each other as well, often to the point of Coordinated Clothes. Just that the guy isn't dressing that way because it'll make his girl happy. He's just being paid.

This can easily apply to families as well, even if the kids are supposed to be adopted or the family is blended. Could also apply to groups of friends, or just a large group in particular.

Remember, this is mainly for modeling, more than fiction (unless it's fiction involving modelling). Chemistry between these people isn't important, since they don't have to act. That is, unless it's part of an ad, but don't look for anything deep. They're just there to sell the product.