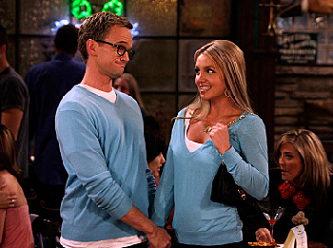 Sickening Sweethearts should dress alike at least once.
Advertisement:

Aw, look, the characters, be they twins, a couple in love, loving family members or a group of friends, intentionally wear matching clothes to show that they belong together. The outfits might be exactly the same, or just similar and matching in style. It's usually seen as cute, cool, creepy or just lame.

Coordinated Clothes will be often employed with Twin Tropes, especially Always Identical Twins to emphasize the identical look. Sickeningly Sweethearts like to choose matching outfits for fancy occasions or costume parties to make it clear that they are together. Lookalike Lovers may also sport similar dresses. It can be a trait of Those Two Guys or Heterosexual Life-Partners. Sometimes a group of friends and a posse might coordinate their clothes as well, or people who perform together. It's fairly customary for members of music groups to wear matching outfits on stage, especially in certain decades. Dance partners are likely to coordinate as well. Most people attending a Themed Party should wear matching costumes, too.

A variation occurs as a part of Irritation Is the Sincerest Form of Flattery when a character tries to imitate somebody they look up to. Copying their clothes is the easiest thing to do, and moreover, it implies they belong together. The person whose appearance is copied might welcome it as proper attention, but individuality and uniqueness is a valued thing, so the role model might get annoyed very soon.

This trope originates in wearing uniforms. Uniforms and sports shirts are worn to show that all the people wearing them form a strong group, and they build morale and encourage unity. However, wearing uniforms is enforced. This trope happens only when characters willingly wear the same clothes to show that they belong together, or when somebody willingly tries to copy their role model.

Sister trope to Superhero Team Uniform. Compare Model Couple, Whole Costume Reference (wearing an identical outfit that was famously worn by another character or Real Life person), and You Are the New Trend (when a character's signature look suddenly inspires widespread imitation).

Contrast with Dresses the Same (wearing the same clothes by accident and considered embarrassing, especially by ladies).