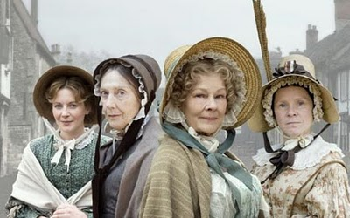 Cranford is a BBC television series based on four books by Elizabeth Gaskell: Cranford, Mr Harrison's Confessions, and My Lady Ludlow, with themes from The Last Generation in England. The teleplay was written by award-winning playwright and screenwriter Heidi Thomas.

Set in the early 1840s in the fictional village of Cranford in the county of Cheshire in North West England, the story focuses primarily on the town's single and widowed middle class female inhabitants who are comfortable with their traditional way of life and place great store on propriety and maintaining an appearance of gentility. Among them are the spinster Jenkyns sisters, Matilda (called 'Matty') and Deborah; their houseguest from Manchester, Mary Smith; Octavia Pole, the town's leading gossip; the Tomkinson sisters, Augusta and Caroline; Mrs Forrester, who treats her beloved cow Bessie as she would a daughter; Mrs Rose, the housekeeper for Doctor Harrison; Jessie Brown, who rejects Major Gordon's marriage proposal twice despite her feelings for him; Laurentia Galindo, a milliner who strongly believes men and women are on equal footing; the Honourable Mrs Jamieson, a snob who dresses her dog in ensembles to match her own; Sophy Hutton, the vicar's eldest daughter and surrogate mother to her three younger siblings, who is courted by Doctor Harrison; and the aristocratic Lady Ludlow, who lives in splendour at Hanbury Court and perceives change as a peril to the natural order of things.

The principal male characters are new arrival Doctor Frank Harrison, who is smitten with Sophy but unwittingly becomes the romantic target of both Mrs Rose and Caroline Tomkinson, who frequently feigns illness to hold his attention; Dr Morgan, an old-fashioned practitioner who finds himself challenged by the modern ideas of his young partner; Captain Brown, a military man whose common sense earns him a place of authority among the women; Edmund Carter, Lady Ludlow's land agent, a reformer who strongly advocates free education for the working class; Harry Gregson, the ambitious ten-year-old son of an impoverished poacher, who as Mr Carter's protégé learns to read and write; farmer Thomas Holbrook, Miss Matty's one-time suitor, who was considered unsuitable by her family but is anxious to renew his relationship with her; Reverend Hutton, a widower with four children whose religious conviction is sometimes at odds with his instincts as a father; and Sir Charles Maulver, the local magistrate and director of the railway company.

The original mini-series was followed two years later by a sequel, Return to Cranford. Wealthy widower Mr Buxton returns to live in Cranford with his son William and ward Erminia. Peggy Bell finds friends outside the circle of her unappreciative family, but must hold fast in the face of adversity. Mrs Jamieson is highly gratified when her sister-in-law, Lady Glenmire, comes to visit, but finds that nothing goes as she expected. Harry Gregson struggles with unforeseen difficulties along the path on which he was set by Mr Carter. The railway approaches Cranford, and with it many signs of change; Miss Matty comes to believe that change must be embraced for the sake of Cranford's future, and persuades her friends to share the belief, with seemingly disastrous consequences.