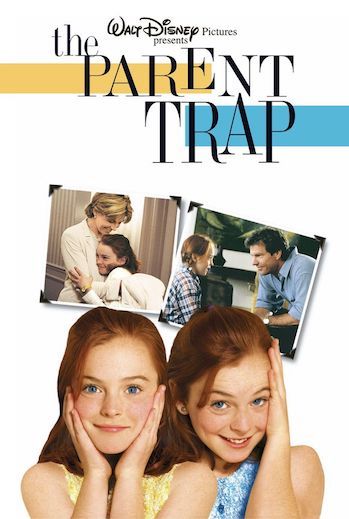 "His and Hers kids. No offense, Mom, but this arrangement really sucks."
—Hallie Parker
Advertisement:

The Parent Trap is a 1998 Disney live-action film starring Dennis Quaid, Natasha Richardson, and a young Lindsay Lohan in her feature film debut. It was also the directing debut of writer and director Nancy Meyers.

Twin sisters Hallie and Annie have been separated nearly at birth when their parents, Nick and Elizabeth, divorced. The year their father is considering remarrying, the sisters meet each other at summer camp. On meeting, they plot to get their parents back together, a plot that involves each pretending to be the other. Hilarity Ensues.

It's a remake of the 1961 Disney film The Parent Trap, which was itself based on a 1949 German book, Das doppelte Lottchen by Erich Kästner.

The Parent Trap provides examples of: