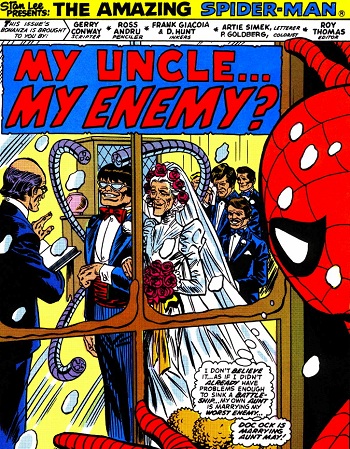 This is a Parent with New Paramour situation in which the paramour is an obvious Devil in Plain Sight. Throughout this storyline, the parent will be firmly holding onto the Idiot Ball while their kid(s) take on the role of the Only Sane Man. This sort of plot can also be done outside the family structure, with concerned friends filling in for the kid. The use of the Idiot Ball may or may not be justified if the new paramour has supernatural powers of some sort.

The horror will probably begin with the parent introducing the paramour to the kid(s) and providing a frightful deadline for their marriage ("This is Mr. Evil and we'll be getting married next week! Isn't that wonderful, kids?"). The paramour may be a character previously established as a Card-Carrying Villain, in which case the encounter will probably go somewhat like this:

Regardless, the paramour will almost certainly behave in an obnoxious I-got-your-Mommy/Daddy-wrapped-around-my-little-finger manner throughout the scene just to make it absolutely clear from the start that they are bad. The parent, of course, will completely miss this. Once the parent is offscreen, expect the paramour to tell the kid(s) exactly what's what, usually consisting of the revelation that they are a Child Hater and plan to send the kid(s) Off to Boarding School. The introduction of the villain is often a Villain Over for Dinner situation.

The parent will sometimes say, "I would never marry someone if you were dead set against it." And then do just that.

Of course, sometimes, the villain really does not have an evil plan regarding the marriage; they just fell for an incredibly inconvenient individual. Or they do have an evil plan, but only because they really do want to stay with their beloved forever.

Naturally, it will be up to the kid(s) to get rid of the paramour since Adults Are Useless. The solution may involve a Kids Play Matchmaker plot, where the kid(s) try to find a different, better partner for their parent.

And yes, it should be "Guess WHOM I'm Marrying".