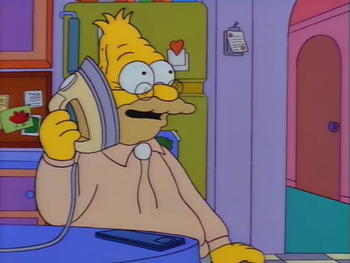 "Huh?! What trope did you say this was?"
"Have you ever known someone with Alzheimer's? If he could actually recognize you as his daughter and not his wife as he regresses further and further back, he was doing really fucking good. Trust me. I've known people with Alzheimer's."
— Decker Shado, Deep Blue Sea Review

It's a sad fact that as we get older, a lot of cognitive impairment can come along for the ride. Alzheimer's Disease, senile dementia, and more. There are many issues that can strike in old age, but it's usually easier for writers to just make old people forgetful. It should be noted that not everything going on inside the brain is a disease or a syndrome; sometimes the machinery just wears out, and sometimes people are just absentminded. And sometimes, they're on medications (or medications that interact with other medications they're taking) that make them loopy.

You can usually expect this to be played for pathos, as Grandma or Grandpa rages against the loss of their faculties and their family has to watch the person they love die by inches (not for nothing is Alzheimer's called "The Long Goodbye").

However, sometimes it's given a more immediate urgency, as when the person has forgotten some piece of information vital to saving the world or doesn't remember that he's an agèd, ass-kicking hero with at least one more good fight in him. In this case, you can probably expect a variant of Easy Amnesia, if only temporarily.

Sometimes though, this trope can be downplayed, as Granny's memory is just shown to be faded, but has no real bearing on the plot, and can usually be used for a cheap laugh. Sometimes seniors take advantage of others' expectations and feign this as a form of Obfuscating Stupidity. Compare Grandparental Obliviousness and The Fog of Ages.

Post-Awareness Stage 6 is without description.