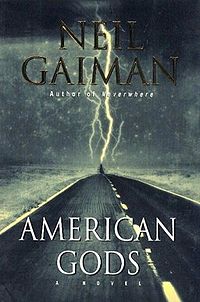 "I know it's crooked, but it's the only game in town."
— Canada Bill Jones
Advertisement:

A 2001 novel by Neil Gaiman, interesting for its examination of the intersection between myth and Americana.

After a three-year prison term following an assault conviction, a man known only as Shadow is ready to be released back into society. He isn't a bad man and wants little more than to go back to his beloved wife Laura, get a job at his friend's gym and live a quiet, simple life. Unfortunately, things are not that simple: Shortly before being released, Shadow discovers that Laura was killed in a car accident alongside the aforementioned friend and gets out early. At loose ends in the world, Shadow finds himself sharing a flight with a seedy old con man who asks to be called Mr. Wednesday. Wednesday is strangely interested in Shadow, and offers to hire him on as a bodyguard and accomplice; Shadow, with nothing left of his old life and nothing better to do, agrees.

Shadow runs errands for Wednesday and travels into the very heart of America, visiting its small towns and meeting its people and its old, forgotten gods, struggling to stay relevant in the modern era. But unbeknownst to him, he has a much larger role in the oncoming conflict than he thinks...

The book is interspersed at various points with stories of immigrants who brought their gods and their beliefs to America with them, and the gods themselves have integrated just as well as their former worshipers. The novel elevates the ordinary and the everyday to mythic status, finding significance in the smallest of things. This quality is exemplified by its protagonist, Shadow, who is both the eternal everyman and something more, something special.

There is a spinoff sequel, Anansi Boys, focusing on Anansi's son(s) in the wake of Anansi's "death".

Shadow's own story is continued in two novellas: "The Monarch of the Glen" (collected in Fragile Things) and "Black Dog" (published in Trigger Warning). A short story that predates American Gods, "Keepsakes and Treasures" (also collected in Fragile Things) has a place in the novel's universe by virtue of its two main characters, Smith and Mr. Alice, playing a major role in "Monarch of the Glen". Gaiman has said there is at least one more novella in Shadow's future and that if he "survives that" he'll make a return to America…

Various television adaptations have been announced. A TV miniseries written by Gaiman was announced and abandoned by HBO

. A fantasy drama series produced by Fremantle Media, with Bryan Fuller and Michael Green as showrunners and Gaiman as Executive Producer, began airing on Starz starting April 30, 2017. Gaiman also serves as one of the show's writers.