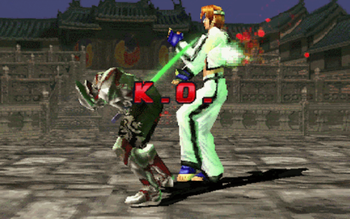 When Seppuku gets weaponized.
"Did Scarlet Witch just John McClane a spell through herself at Banner?"
— Cinema Wins, "Everything GREAT About Avengers: Age of Ultron

Whether due to extreme Combat Pragmatism, being a next-level Combat Sadomasochist, or simply the lack of any other viable options, a character attacks their opponent through their own body. So it's a variant of Shoot the Hostage and Deliberate Injury Gambit, except the hostage is the one inflicting the injury on themselves, and/or the deliberate injury is self-inflicted. The hope is that the attack hurts the opponent even more, taking him out of the fight or at least setting him up for follow-up attack (either by the wounded but still functional attacker, or by that character's allies if the character's attack incapacitates himself as well).

Best done with a bladed weapon of some kind, though many other kinds of attacks can be used (and if the character is resistant or immune to his own power, so much the better). If the person doing this is sufficiently skilled, tough, or just plain stubborn, they'll inflict a wound on themselves they can easily recover from, but their opponent won't be so lucky. If they aren't, the result ends up somewhere on the spectrum between Heroic Sacrifice, Heroic Suicide, and Taking You with Me.

Can be a variant of Suicide Attack and/or Death-or-Glory Attack, and even in mild examples the attack would effectively be Cast from Hit Points. Compare Pull Yourself Down the Spear and Kicking My Own Butt.