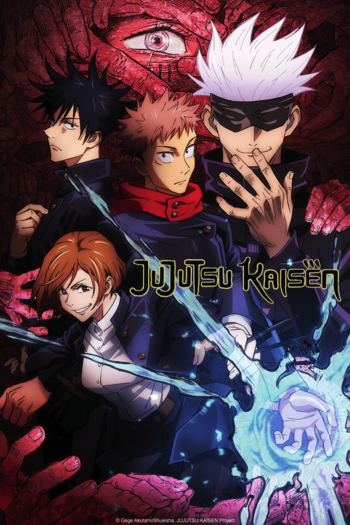 My true form constructs a future for I, who curse and am cursed! Characters  Top: Mahito. Second row, from left: Megumi Fushiguro, Yuji Itadori, Satoru Gojo. Bottom: Nobara Kugisaki.
" The people I know, I want them to die properly."
—Yuji Itadori
Advertisement:

Yuji Itadori is an athletically gifted but easygoing high school student not sure of his path in life when, during a routine visit, his grandfather suddenly perishes, but not before making Yuji swear a promise to him: that he will do kind deeds so that he dies surrounded by loved ones, unlike his grandfather.

The boy isn't left long to grieve however, when he runs into Megumi Fushiguro, a sorcerer on the lookout for a cursed object housing an evil spirit. When Itadori's friends open the cursed object that they found, things go south as the cursed spirits that it spawned come to roam the school. As Megumi and Yuji are pushed against the wall, Yuji swallows the cursed object, incarnating into his body none other than the King of Curses, Ryomen Sukuna. Yuji is forced to become a sorcerer himself to escape execution, and what starts as a mission to find and consume the rest of Sukuna's fingers to end the Vengeful Spirit's threat quickly grows into a conflict that could forever change the balance between humanity and Curses.

The series is a sequel of a four-chapter monthly series in Jump GIGA called Tokyo Metropolitan Curse Technical School, which was later released under the title Jujutsu Kaisen 0. It takes place about a year or so before the main story and stars Yuta Okkotsu, a first year student at Tokyo Prefectural Jujutsu High School and the possessor of a powerful guardian spirit known as Rika.

Not to be confused with the martial art of Jujitsu, which does not involve sorcery whatsoever.

Example of:
Purple Is Powerful