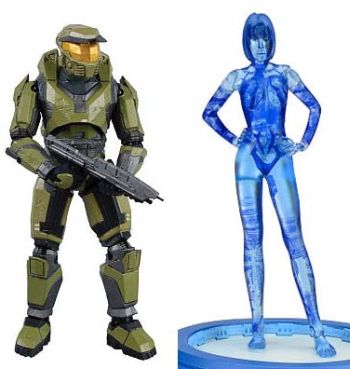 On the left: the Master Chief action figure, with 26 moving parts!
On the right: the Cortana action figure, with...zero.
"Girls can never do anything. Men can ride about the countryside and do things. Girls have to sit and wait for things to happen."
— Margaret Dashwood, Sense and Sensibility (2008 adaptation)

This trope is rooted in the female/male = passive/active dichotomy.

Essentially, it's the idea men need to be out doing things to retain our sympathy and interest, but women can just sit there looking pretty, emotionally reacting to events, and we won't like them any less for it. Like most gender-based Double Standards, this is unfair and restrictive to both genders, male and female.

Part of this trope refers to how characters function to advance the plot. While male characters will be directly involved in the action, or manipulating the action behind the scenes in a comprehensive way, female characters, when they do take action, often take it in the form of inspiring, motivating or nagging a male character to do something. See Lady Macbeth, Henpecked Husband.

And, yes, it also applies to that meaning of "action" as well. In the past, and indeed today, many traditions considered women good if they didn't have sex (got no 'action'), and/or considered them to be superior to women who did. note (unless it was strictly for reproduction or to satisfy her spouse)

This trope is a possible consequence of Men Are Generic, Women Are Special. Since men are generic, any individual male character has to do something special to stand out. But because women are special, a female character just has to be, well, female.