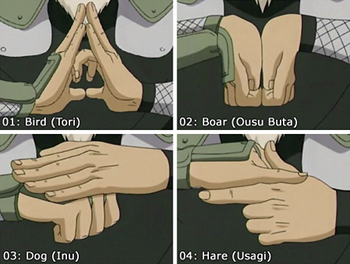 (literally means "nine syllables seal") are ritualistic hand gestures that are commonly used as part of a magic formula, with roots in Taoism. They are similar to Mudras

originating from Hinduism, another type of symbolic hand-gestures (but can include other parts of the body). Also ninjas, and others who use them often also Call their Attacks, so they may be considered Mantras

This trope is popular in Japan (and China), as they're the source of the trope. However, you can expect some works from other countries feature this as well, often parodied. One of the Ninja cliches (along with smoke bombs, kabuki stagehand costumes, and shurikens), but sometimes monks also do this as well, especially when meditating.

The most used hand gesture in works is the index and middle finger of both hands pointed up, while the ring and little finger wrap the other hand, as shown above. Another variant is the clap palms, more commonly used by monks. Sometimes a one-hand variant is also used.