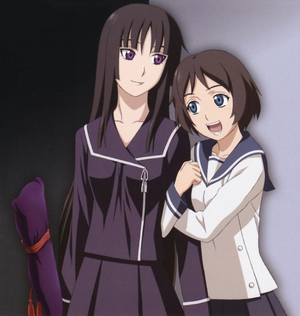 Yomi and Kagura
"Will you kill someone you love, because of love?"
—The show's Arc Words
Advertisement:

This anime series is a Prequel to Ga-Rei, depicting the life of Yomi before her fall to evil, and her strong sisterly bond to Kagura. The two girls' relationship is the central focus of the story, emphasizing why Kagura's heart often wavers while fighting Yomi throughout the course of the original manga. Its tone is considerably different from that of the manga, making the anime more Seinen than Shōnen. The show is probably most notable for throwing off viewers with its first two episodes by killing everyone off. The focus is instead on Yomi, making a character who was originally a rather average villain into a highly sympathetic, tragic heroine.

Licensed by Funimation in August 2010 and released to DVD and Blu-Ray in April 2011.

Tropes employed by this series are: