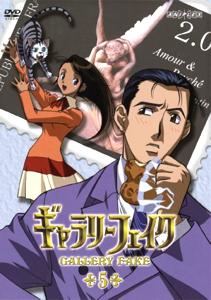 Opposites Attract at its finest
Gallery Fake is a story about an ex-curator, Fujita Reiji, who opens a Gallery full of forgeries, named "Gallery Fake". This gallery has ties to the black market and is the place to go to get a masterpiece cheap... at least, that's what everyone says. It ran as a manga in Big Comic Spirits from 1992-2005, and as a 37-episode anime by Tokyo Kids in 2005.