Running Away to Cry 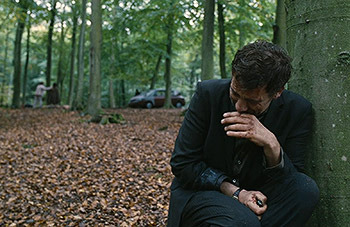 Getting emotional and crying can be an embarrassing thing. It leaves you emotionally vulnerable to others, and often times you don't look terribly nice while doing it either, though a lot of media don't show that. Heck, according to the media, men just plain aren't supposed to cry at all, so letting others see them crying is a no-no. Therefore, it's pretty common for characters when they get worked up to go somewhere no one else can see them do it. A pretty common one is the bathroom since people have to leave you alone there. Usually, this will be followed up (or even revealed to the audience) by having one character find the other crying in whatever private area they found.

An alternative to Sand In My Eyes usually for when using that would fall into Implausible Deniability for the character. It's also a Sister Trope to Trying Not to Cry, which will overlap if characters just plain don't want others to see them cry. In fact, oftentimes, this trope will serve as a last resort when they realize that Trying Not to Cry isn't working.