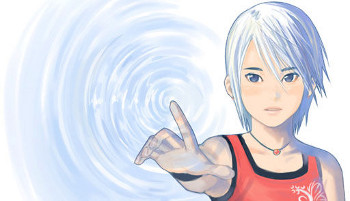 Memory is the key.
"I've never felt like this before. I just found out that...my father is alive."
Advertisement:

Ashley Mizuki Robbins, a white-haired Tomboy who is about to turn 14, suddenly receives a package from her dad who she hasn't heard from in years—mostly because she thought he was dead. It contains a DTS (DAS in the European version, which stands for Dual Trace/Another System), a device that looks suspiciously like a Nintendo DS. Her aunt and caretaker Jessica takes her to the island where dad has been doing research, and leaves to go find him.

When Jessica doesn't come back, Ashley decides to go after her. Finding Jessica's glasses on the ground, she starts to assume the worst. She finds her way across the island, through a graveyard, and to a mansion. She meets the ghost D, who can't remember anything about his past life, and who decides to follow her as she tries to figure out just what is going on. At the same time, as they navigate the Edward mansion, D starts to remember things about his past life, closely mirroring Ashley's realizations about her own family.

The game was followed in 2009 by a sequel, Another Code: R - A Journey Into Lost Memories for the Wii. The sequel takes place 2 years later, as Ashley is called to the Lake Juliet campsite for a camping trip with her dad, only to find there are still a few issues to be dealt with with regards to her past, including a new device that looks like the controller to a hit video game console. Sadly, it turned out to be a No Export for You moment for Americans, as the game didn't perform particularly well in Japan or Europe and received only moderately positive reviews.

The Hotel Dusk: Room 215 series takes place in the same universe, twenty-five years before, but is not connected otherwise.