Video Game / Adventures in the Galaxy of Fantabulous Wonderment 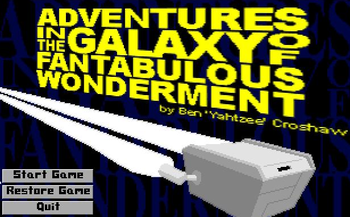 Adventures in the Galaxy of Fantabulous Wonderment is an Adventure Game from 2005 made by Ben "Yahtzee" Croshaw (Yes, again).
Advertisement:

Daniel Gordon, an ordinary salaryman, is not having a good day. First, he gets caught by his boss playing video games in his work time, then he is kidnapped by a galactic organization to serve as a Redshirt, and then events conspire to force him to become the new captain of the crew who bought him and to investigate on disappearances that happen in the entire galaxy.

Gameplaywise, the game is quite experimental, combining an Adventure Game with parts from Turn-Based Strategy and Economic Simulation Games, and there is even Wide-Open Sandbox elements.

Yahtzee briefly worked on a sequel, named Escape from the Dimension of Insidulous Cruellitude, but ultimately abandoned it due to lack of interest. He played the half-finished prototype on his YouTube channel, yahtzee19, under the title "Abandoned AGS Games".

Note, while the game is a sequel to the Rob Blanc trilogy, it is not necessary to have played them to enjoy this one.