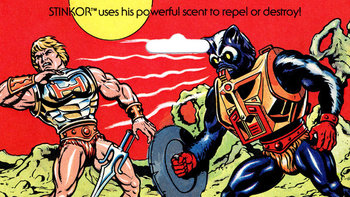 Where's a can of tomato paste when you need one?!
"As a foulness shall ye know them..."
— The Necronomicon
Advertisement:

Frequently, when a character enters an evil or cursed area, they'll find that it smells really, overpoweringly bad. It usually smells of rotten flesh (or just "death") and grows more powerful as the investigator gets closer to the threat. Another variant is an evil being carrying a bad stench with it when it appears. Frequently one of the Horror Tropes.

This trope stems from the fact that dead and unclean things smell bad, so if somewhere or something smells bad, it's probably dangerous. The belief that demons smell of sulfur is also a contributing factor.

In The Tough Guide to Fantasyland, Diana Wynne Jones refers to this as the "Reek of Wrongness," which can take many forms besides just smell.

Compare with Uncleanliness Is Next to Ungodliness, where the stench is just a character's poor hygiene. Can cross with Stink Snub should a character comment snarkily on the villain's odour. Please note that the smell of evil isn't always proportionate to its taste.

Dragon's costume is covered in sulfur as part of his gimmick. Raz isn't impressed.

Dragon's costume is covered in sulfur as part of his gimmick. Raz isn't impressed.