Literature / A Portrait of the Artist as a Young Man 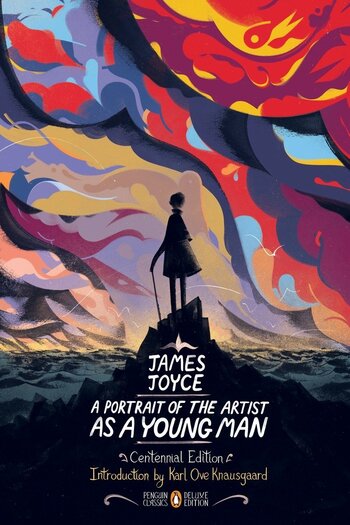 "The soul is born, he said vaguely, first in those moments I told you of. It has a slow and dark birth, more mysterious than the birth of the body. When the soul of a man is born in this country, there are nets flung at it to hold it back from flight. You talk to me of nationality, language, religion. I shall try to fly by those nets."
—Stephen Dedalus, actually James Joyce.
Advertisement:

A mostly autobiographical novel by James Joyce, centred on a young Irishman, Stephen Dedalus, and his struggle to express himself. The story takes us from his early life as a boy through his relationship with the church and with the institutions of Irish society in general, to his becoming a young adult. The crux of the plot is Dedalus's struggle with his autonomy against the wishes of the Roman Catholic Church.

The novel was published in serialized form from 1914 to 1915, then collected in book form in 1916. The story started life as a novel to be called Stephen Hero, which Joyce was working on from 1904 to 1906. Joyce was not satisfied with the earlier work, and re-wrote it from page one after Dubliners was published. Stephen Hero only exists in incomplete form, but it was published in 1944, following the author's death.

Tropes Used In The Novel Include: